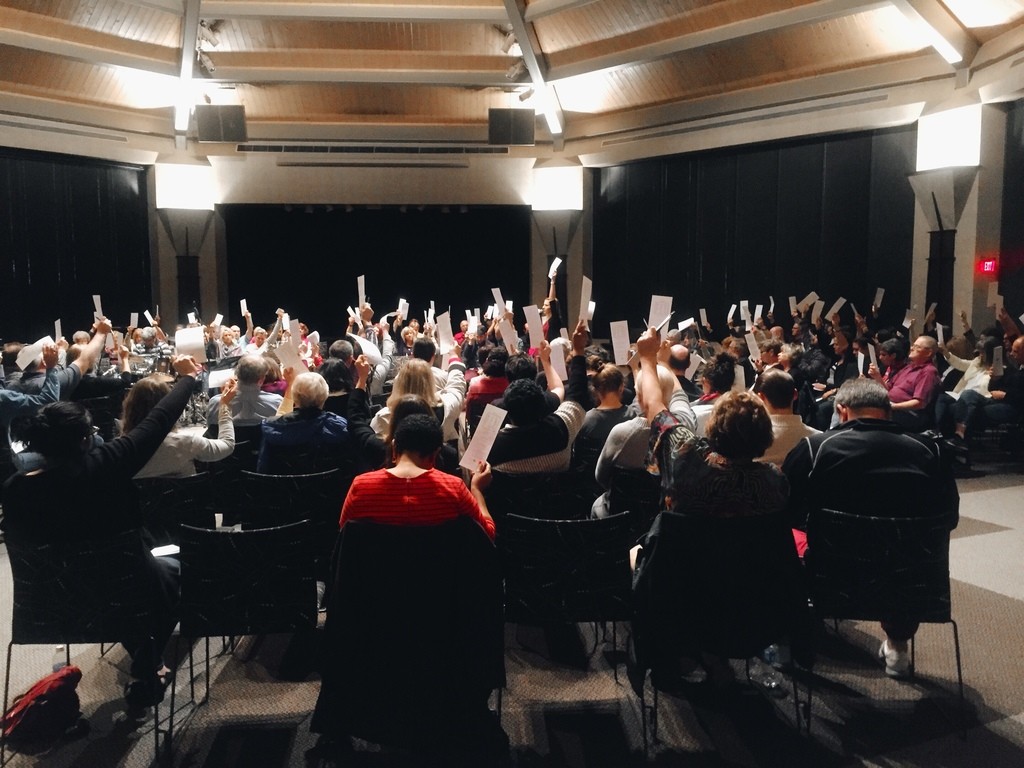 It seemed an odd beginning to a night of celebrating God’s ongoing redemptive work in the world. There we were praying for a child who had been critically injured in a crash just steps from where we were sitting. How do you pivot from praying that prayer to a Psalm reading with the refrain of “Praise the Lord”? Hadn’t we left Lament behind in the empty tomb?

But as the night unfolded; as we prayed our prayers of gratitude, and read together words of praise and confession and doubt; as Aaron traced the theme of God’s redemptive, resurrective work throughout the story of Scripture and into our own lives; as we received communion and held the broken body and spent blood of our Savior in our hands I began to see that prayer as the perfect beginning to a night of celebrating God’s ongoing redemptive work in the world.

We don’t, after all, leave Lament behind in the empty tomb; that’s the whole point. The Lament follows us; the longing that Aaron mentioned is all around us; the yearning for resurrection is universal. Turning the page from Lament to Praise as easily as March to April would mean denying the reality of our lives and of the world. Pain continues, even after Easter. And yet.

And yet, God’s work of resurrection, the work that was begun in the ruins of the Garden, continues. Even now, today, as children fight for life and jobs end and relationships wither. Lament and Praise are not opposites, but two sides of one coin. We Lament because God can be trusted to bring about the resurrection he has promised. We Praise because God has acted in redemptive ways before and will do so again.

And, as Aaron said and Jenna led us through, both are critical components of joining God in his resurrective work. God is calling us to have eyes to see the reality around us, a reality that is so often missed. Throughout this series we’re going to be cultivating a practice of intentionally seeing, seeing in the name of Gratitude, Longing, and Joining.

I suspect that each of us will find one of those three easier than the other two, and probably one harder. For me, seeing through the lens of Longing is quite natural, the need for resurrection around me all too obvious. Children are dying, after all, sometimes right down the road. Far harder for me is seeing through the lens of Gratitude, seeing the resurrection that is already happening even in the midst of death. But that resurrection is real, just as true as the death, if only we have eyes to see. I’ll be working most intentionally to cultivate Gratitude in these coming weeks.

But as Aaron said, God calls us to do more than notice. God calls us to join with him in bringing new life to a dying world. God invites us to partner with him as he rebuilds and remakes and renews. These coming weeks, we’re going to hear some inspiring stories of people who have joined with God in his resurrective work. The hope is not that we will put these people on a pedestal, or simply admire their courage or smarts or initiative. The hope is that by hearing others’ stories, we would be able to see clearly our own, to have eyes to see where God is calling us to partner with him in bringing resurrection – in big ways or small – to the real world around us. I hope you’ll join with us in cultivating eyes to see, opening yourself up to where God might be inviting you to be his partner.